As well as reviewing for The Age this year (which is where the ten Comedy Festival reviews I've posted so far were originally published) I've also been reviewing for Citysearch and Arts Hub. For completeness sake, here's a summary of the other shows I've seen and reviewed to date:

Anyone for Tennis? - Prepare to Be Tuned
Three and a half stars

Tom Ballard - Since 1989
Three and a half stars

Posted by richardwatts at 9:09 am No comments: 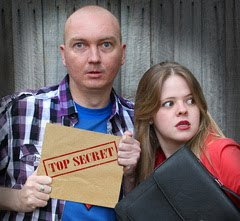 In a secret bunker somewhere in central Melbourne, two brave advocates of free speech and transparent governments are preparing to announce a shocking secret that will forever change the face of Australian society. Can they evade the sinister forces arrayed against them long enough to make their revelation, or will they end up imprisoned in Australia’s version of Guantánamo Bay?

In their first show as a duo, charismatic local comedians Adam McKenzie and Tegan Higginbotham (formerly of trio The Hound of the Baskervilles) take their audience on a frenetic, occasionally self-indulgent (did we really need to see Adam's Yoda impression again?), but entertaining tour through the world of conspiracy theories and espionage, referencing everything from Mission Impossible and Mythbusters to Wikileaks and a 1966 UFO sighting in the Melbourne suburb of Westall.

Pacy and punchy, though sometimes ragged, the end result is a show that’s cinematic, distinctive, playful, and surprising – especially its climax.

Watson in The Super Secret Awesome Show
Victoria Hotel until April 24
Posted by richardwatts at 9:02 am No comments: 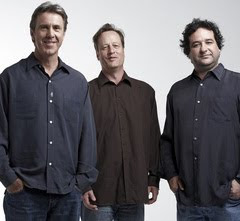 With the bogan-impersonating Robbins as MC, Stilson castigating himself for supporting the Richmond football club, and Robbins making light of his current Adelaide court case by describing the presiding judge as a “fuckwit”, this was a night of cheap laughs by three crowd-pleasing comedians who gave their audience exactly what they wanted to hear.

I honestly didn't laugh once throughout their trio's entire hour, though I appeared to be the exception amidst a crowd that was noisily lapping up their every word.

The overall impression was one of laziness from successful comedians who know they no longer need to exert themselves to entertain their fans.

An edited version of this review appeared in The Age on Saturday April 23.

Posted by richardwatts at 8:56 am No comments:

If making breakfast while juggling the demands of parenthood has ever seemed challenging, spare a thought for Anna Lumb. Balanced precariously in high heels, Lumb makes herself a breakfast of rice bubbles, coffee and fruit while spinning a hula hoop around various extremities, including her neck. It’s a strong opening scene for this occasionally uneven show, which employs circus, cabaret, and comedy to tell the story of a 50 foot woman in search of a new home.

Replete with B-movie imagery, a hairy sidekick, and a slideshow of tacky tourist attractions such as the Big Banana, Lumb is at her best with the production’s physical elements. Other sequences, such as a more contemplative scene set to Aretha Franklin’s ‘(You Make Me Feel Like ) A Natural Woman’ are less successful.

If you’ve ever wanted to watch a woman dance en pointe while wearing an apartment block on her head, this is the show for you.

Anna Lumb - Big Shoes to Fill: An Expose of a 50 Ft Woman Trades Hall until April 24

This review originally appeared in The Age on Monday April 18.
Posted by richardwatts at 9:03 am 6 comments:

An exploration of human sexuality told through dance and mime, Sexytime! is not a show for the shy or prudish. Performers Tessa Waters and Kai Smythe spend some of their time on stage semi-naked, and are well aware of their ability to induce laughter by wobbling a belly or jiggling a buttock; a skill they exercise regularly.

With Waters as the beehived host and Smythe a silent, hirsute stage presence, the two successfully skewer gender roles, pay homage to the 60s’ Sexual Revolution with an interpretive dance set to Orff’s ‘Carmina Burana’, and satirise modern mating rituals in a hilarious extended sequence that starts in a nightclub and ends in an awkward morning after.

Opening night nerves resulted in an initially stiff performance, but the duo’s expressiveness and confidence increased as they relaxed into the show. Though covering some familiar ground, Sexytime! is an engaging, endearing, and very physical comedy.

This review originally appeared in The Age on Thursday April 14.
Posted by richardwatts at 12:51 pm 1 comment: 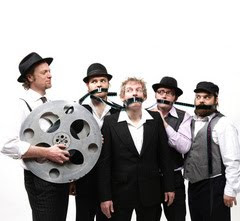 Since 1996, Melbourne quintet the Blue Grassy Knoll have played their bluegrass-inspired live scores for the silent films of Buster Keaton around the world; an inspired fusion of cinema and performance that never fails to delight.

Keaton, a stony-faced master of physical comedy, made a remarkable series of silent films between 1920 – 1929, including the features The General and Sherlock Jnr. For their Comedy Festival appearance, Blue Grassy Knoll accompanied three of Keaton’s short films, including the world premiere of their brand new score for his 1921 film The Playhouse, a homage to vaudeville notable for its innovative camera work.

The band provides a soundtrack for every aspect of the films, from carpentry and shrill voices to dramatic moments and comedic hi-jinks. Attuned to every nuance of Keaton’s performance, whether lugubrious or gleeful, their versatile scores bring his films to vivid life. The Blue Grassy Knoll are a national treasure.

This review originally appeared in The Age on Tuesday 12 April.
Posted by richardwatts at 7:51 am No comments: 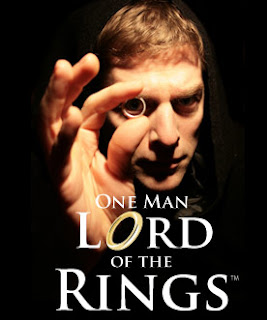 God knows what the one hapless audience member on Saturday who’d neither read nor seen The Lord of the Rings made of this mad, magnificent performance by Canadian comic Charles Ross, in which he condensed Peter Jackson’s three epic fantasy films (The Fellowship of the Ring, The Two Towers and The Return of the King) into a single hour of hilarity, vocal dexterity, and fan-love.

With a judiciously raised eyebrow, a hunched shoulder or a guttural voice, Ross successfully and faithfully evoked the films’ numerous characters and key scenes, while simultaneously mocking the movies’ more ludicrous lines and moments.

Sometimes the humour lay in Ross’s portrayal of a character, such as a running joke about actor Orlando Bloom’s hair; at other times a knowing aside to the audience or a reference to Johnny Cash’s ‘Ring of Fire’ evoked gales of laughter. Definitely one for the fans, but equally definitely, brilliant.

This review originally appeared in The Age on Monday April 11.
Posted by richardwatts at 9:44 am No comments: 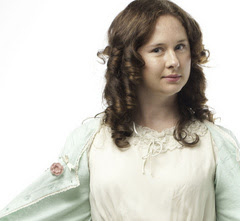 As anyone who’s ever moved back in with their parents knows, co-habitation between parent and adult child entails a whole new set of rules. For comedian Mel Buttle, living with her father Barry in semi-rural Queensland means following his lead – even if it means hiding from his pet magpie.

Eager, awkward, and self deprecating, Buttle is at her funniest when discussing her own accident-prone existence, such as a cringe-inducing encounter with a dead wombat, and a painful episode involving a Religious Education teacher and a banana peel. Routines about her father’s escapades, such as his harassing neighbours in the name of koala protection, are less effective; she seems hesitant to fully engage with the material, perhaps for fear of insulting Barry by mocking him as fully as she mocks herself.

This review originally appeared in The Age on Friday April 8
Posted by richardwatts at 10:14 am No comments:

MICF 2011 review: SAM SIMMONS AND THE PRECISE HISTORY OF THINGS 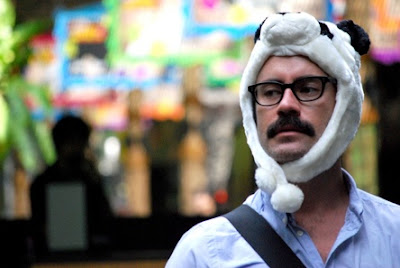 Mining a rich vein of absurdist humour, and utilising a selection of lo-fi props, including a cardboard spaceship and a series of flipchart cartoons, broadcaster and comedian Sam Simmons’ latest show baffles and delights in equal measure.

The Precise History of Things is nominally a collection of responses to letters and emails Simmons has received at JJJ; the jumping-off point for a collection of sketches that range from toilet tips for men to an opera set in the Mexican food aisle at a Coles supermarket.

Transgressing both audience boundaries and traditional narrative structures, and featuring everything from nudist pinecones to shorts-wearing moths, the dream-logic progression of Simmons’ manic performance conceals a subtle concern for the petty cruelties of modern life. Not every element is completely successful, but anyone who can turn a packet of Continental Creamy Alfredo Pasta Sauce into an object of hilarity is truly deserving of praise.

This review originally appeared in The Age on Wednesday April 6.
Posted by richardwatts at 2:57 pm 2 comments: 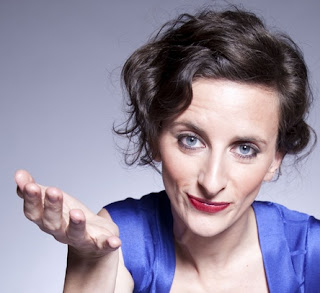 For a woman who admits to suffering from an anxiety disorder, Melbourne’s Felicity Ward seems to have almost no capacity for self-censorship or shame – and if she does, she hides it well.

In Honestly, Ward presents an array of ideas and anecdotes loosely connected by the theme of frankness, ranging from her obsessions with punning shop names (‘Halal, Is It Meat You’re Looking For?’) and the public behaviour of junkies, through to weight issues and depression. Some inspired moments of audience interaction, which never seem forced or cruel, feature throughout; the highlight of which is a routine discussing the ubiquity of autotune in pop music, memorably demonstrated via an iPhone app and a volunteer.

Foul-mouthed, feisty and very funny, Ward’s expletive-laden delivery sags in the home stretch with some weaker routines about STD checks and 'sax-crimes', after which even a dynamic musical performance can’t quite recapture her earlier brilliance.

This review originally appeared in The Age on Tuesday 5th April, 2011.
Posted by richardwatts at 7:47 am 1 comment: 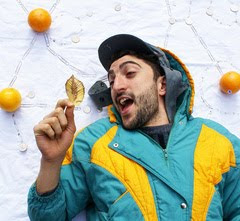 Meet Angus, a socially inept idiot savant determined to uncover the secret formula of the universe. His awkward encounters with arrogant businessmen, cursed Collingwood beanies, Murakami-quoting junkies, and the villainously moustachioed Manobozo are about as far removed from traditional stand-up as possible, but generate scenes of exceptional, unbridled hilarity and occasional and surprising pathos.

Spirason’s gurning and clowning don’t always generate a laugh a minute – the hilarity deliberately shifts into occasional scenes of quiet contemplation – but his remarkably focussed physicality and precise comic timing ensure solid and consistent entertainment. Offbeat, original, and highly recommended for anyone who likes their comedy a little left of centre.

This review originally appeared in The Age on Saturday April 2.